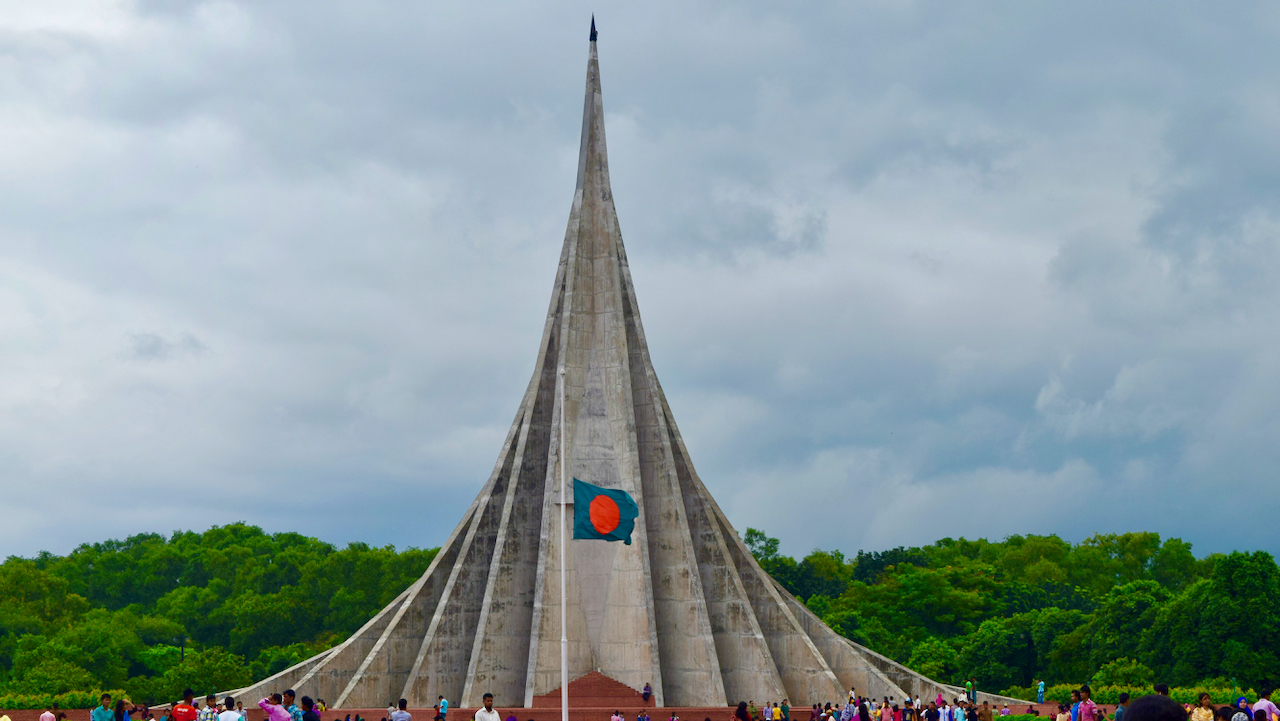 National monument of Bangladesh also known as the National Martyrs’ Memorial is a fascinating piece of architecture. It is located in Savar which is about 35 Kilometers and 90 minutes ride from the capital Dhaka. You can visit this place as a day trip from Dhaka. In this writeup, you will know about the history behind the national monument of Bangladesh and how a nation was born despite all the odds.

Let me share some of my real life experiences before telling you about the national monument of Bangladesh. It’s pretty common for me to have a conversation like below while traveling.

“Where are you from?”

A moment of silence.

“Do you recognise where it is?”

Gosh! The response to the most popular question for a traveller used to annoy me. Now, I accept it. That’s why I feel a little hesitant to answer it instantly. Before giving the reply, I pick up my cell phone, open the Google map and point it appropriately.

I often amuse. How come someone cultivated doesn’t know the name of the eighth most populated country on earth? Then again, I am a traveller and I am presumed to have an enormous heart, so I ignore it.

How did it Start?

The British East India Company took over the Indian subcontinent in 1857 and ruled the region for 90 years.

The 90 years of ruling was not enough. Prior to leaving the country in 1947, they split the Indian subcontinent in two parts based on mostly religious faith. So, two countries were born – India and Pakistan.

The creepiest thing happened when they made the map of Pakistan. They formed two areas far from each other and separated by India together and announced a country. What made it funnier apart from the geographical position is, they were different in all aspects – culture, language, cuisine, clothes – the list can continue on forever.

The two green parts marked as West Pakistan and East Pakistan were a country named Pakistan arranged by the British.

You got to kidding me, right?

Nope, I am serious. If you don’t believe me, look it on the internet.

The rulers of Pakistan were from West Pakistan (although the population of East Pakistan was higher). Hence, the central government was sitting in the Western part. There was a honeymoon period for a couple of years. Then came 1952, when West Pakistan announced Urdu (the language they spoke) as the language of East Pakistan, too (which was Bangla). The residents of East Pakistan perceived that as a threat to their culture.  They protested, and the army killed innocent civilians in East Pakistan. Can you think someone perished because they wished to talk in their own language?

A History of Oppression and Deception

That was just the starting point.

In course of time, an account of oppression, maltreatment, domination, neglect, and destitution in the name of superiority complex continued.

To give you some example:

East Pakistan was the major Jute producer, and Jute yielded the highest sum of revenue for Pakistan. However, the maximum spending was in the army. The East Pakistan border had no issue with India. In summary, East Pakistan earned the money, and West Pakistan spent it.

So, the East Pakistanis were not pleasant at all.

Then appeared the national election of 1970 during December. Pakistan had 300 parliamentary constituencies. Awami League, a political party established in East Pakistan, won in 160 constituencies in national assembly. If you do the math, one needs 151 seats to hold absolute power. So, they were all set to be in the leadership. Their rival the Pakistan Peoples Party (PPP) was from west Pakistan and in power before the election. Although Awami League won the majority and mandate, PPP didn’t prefer to hand over the power to a party formed in the east of Pakistan. Such was the bigotry and division.

It blew everything. The unrest erupted in the eastern part. The Awami League claimed their earned power.

After fewer than 3 months of the election, on the midnight of 25 March, an unparalleled event took place. With no provocation, the Pakistani Army massacred Dhaka, the biggest city of Bangladesh, in the darkness. They murdered thousands of innocent people on that night. They even invaded the University’s hostel of Dhaka, murdered the male students and abused the girls. We know this as the “Operation Searchlight”. A month earlier, the Pakistani president, Yahya Khan, said in a conference – “Kill three million of them and the rest will eat out of our hands”.

Only if you could affirm it as a war. A trained army is killing innocent people, torturing them, raping women, torching villages after villages.

Who is fighting against them? Civilians like me – writers, and farmers, fishermen, students, teachers, kids, women – everyone, with whatever they had in their grip.

This war took place for 9 months, India helped East Pakistan during the last month of the war. The Pakistani army surrendered on 16 December 1971 after killing 30 millions of civilians – the second most intense genocide in the history of mankind after the second world war.

A new country was created on the face of earth named Bangladesh after an unprecedented carnage, tears and suffering. I am proud to be a citizen of this land – I born after 11 years, in 1983, in Bangladesh.

The National Monument of Bangladesh

The place, which I am presenting to you, was raised in the memory of the martyrs who sacrificed their lives for the nations in 1971. This is the national monument of Bangladesh.

It’s a large compound in Savar, about 30 Kilometers from Dhaka. The key structure is made of seven pairs of triangular shape. The outermost in the broadest, but shortest. The following ones grew taller, and the innermost formed the peak. It’s an analogy for the rising of a nation through the seven most important events which lead to the birth of Bangladesh despite all the odds.

The monument is made of concrete and the rest of the structures and pavements are made of red bricks. You will notice it differently from various angles. When you will be in front of it and far, you will see a symmetrical pyramid-shaped formation. Approaching nearer to it will disclose a unique perspective.

You got to see it, to realize it. If you look sharp, you will find the surface of the structure uneven. It portrays the strife towards our freedom and independence and reminding people about the tough journey ahead of us.

It looks like an illusional figure to me. Whenever I visit there, I walk in different directions to see how it changes its look.

The campus is also a beautiful one with trees, walkaways, an artificial lake, and a cafeteria.

You will enjoy a reflection of the monument on the water which is placed in front of it just like the Taj. If the season is right, you will also see water lilies.

I have been to many prominent places in the world. However, each time I go there, my hairs rise in the thrill. It’s a mixed emotion for me. I feel sad for the martyrs, joyous for the victory they pulled, and fortunate to live in an independent country. Still, there are millions searching for freedom around the planet.

I also feel disappointed thinking about the stride we made over the last 50 years. We could have developed much quicker and moved far as a nation which didn’t happen.

But, then I understand, the onus is on me, and on us, too, to take the country forward so we can pass the baton to our children in a better shape.

If you are in Bangladesh, visit there to sympathize with the story behind it and appreciate this architectural marvel. If you are not in Bangladesh yet but a fan of architecture and history, think about visiting it.

The national monument of Bangladesh is one of the most marvellous structures I ever seen in my life. Maybe I am biased, maybe I am not, it’s up for you to say. I will wait to hear from you!

And I won’t think twice before telling you where I am from. I felt you already know where it is.

I will smile and say – “I am from Bangladesh”

How to go to the National Monument of Bangladesh?

It’s 30 Kilometres northwest of Dhaka, you will find it in Google Map. You should plan for visiting the national monument after enjoying the major attractions of Dhaka. If you are a hardcore backpacker, take a local bus towards Savar. It will cost you 50 cents. However, the bus can be crowded and people won’t speak in English. In that case, your option is to hire a car or an Uber Outstation.

It’s free. Pay nothing if someone asks for money.

Just get out of the complex, cross the road, you will find a restaurant, this restaurant run by Bangladesh Parjatan Corporation. They served excellent quality local food.

If you want something tastier, go to the Savar Golf Club which is 1.5 KM from the monument. Inside the golf club, you will find the restaurant. Don’t forget to try their mutton curry.

Facts about the National Monuments of Bangladesh

When was the national monument of Bangladesh inaugurated?

They inaugurated it on 16 December 1982 – exactly 11 years after the victory.

Who was the architect of the national monument of Bangladesh?

Syed Mainul Hossain was the architect. They selected his design through a design contest where 57 participants competed.

Who is Syed Mainul Hossain?

Mr. Hossain was only 26 years old when he submitted his design. He was a brilliant architect, won the highest civilian honors of the country, later suffered from mental illness and died in 2014.

How big is the national monument campus of Bangladesh?

What is the national monument of Bangladesh called in Bangla?

How tall is the highest point of national monument of Bangladesh?

I heard, important persons visited the national monument of Bangladesh. Is it true?

Whenever an important person visits Bangladesh, he visits this place and plants a tree. You will see the name of famous persons in a placard beside each of the tree

Loved this? Pin it!

Where can I Travel to Bangladesh?