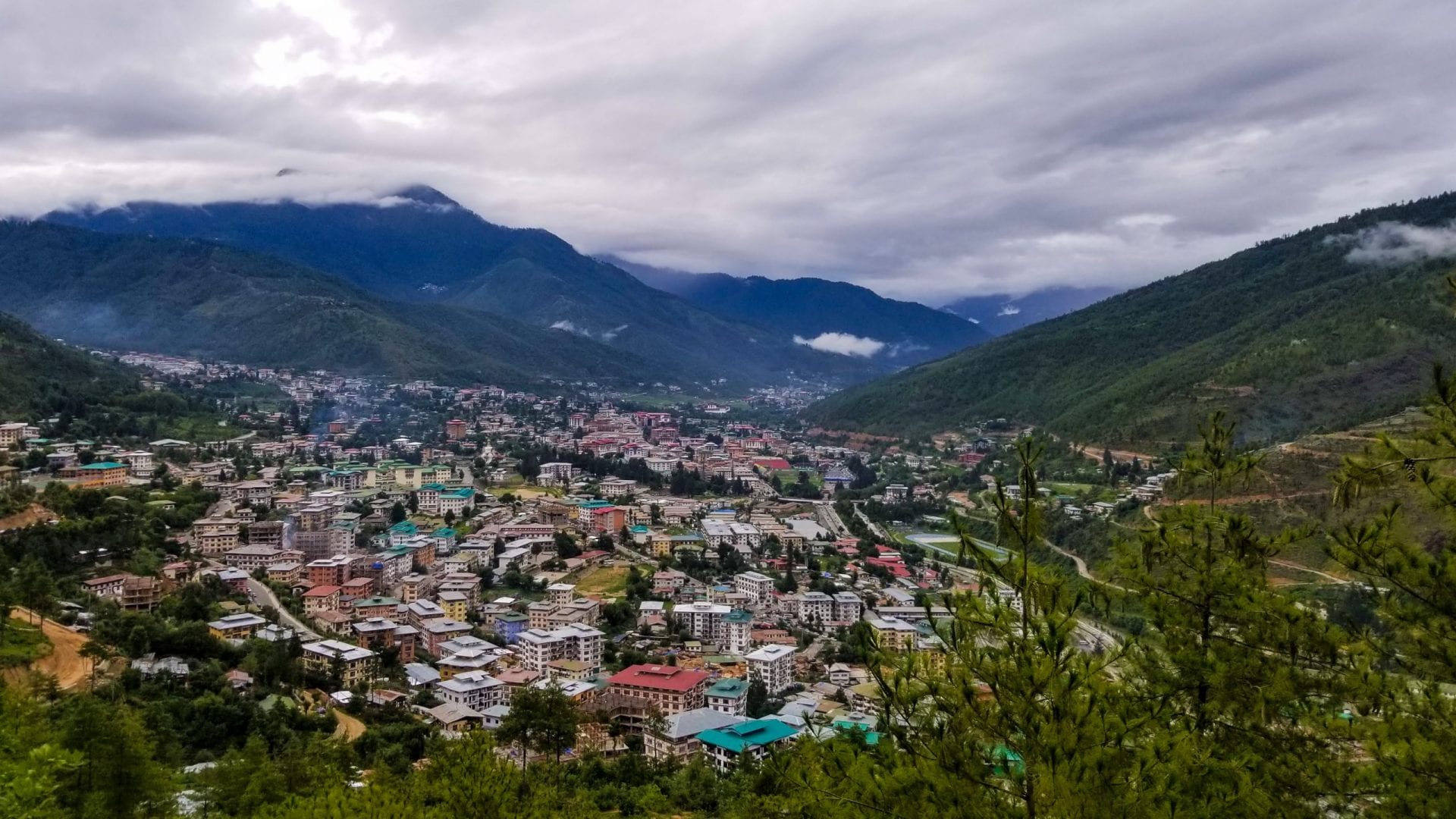 Places to Visit in Thimphu

Thimphu is a perfect base to explore Bhutan. It can also be seen as a place to break your journeys to the different places in Bhutan. If you get bored of seeing the beautiful countryside of Bhutan, Thimphu might come as a change by presenting it’s nightlife and city like vibe.

Thimphu is the capital of Bhutan, a mystic country in South Asia. When I think of capital, I imagine large buildings, big cars, buzzing city life with a lot of noises and pollutions. You may blame me for stereotyping, but, pardon my meanness. Thimphu is a rare exception to that. You won’t find high-rise buildings here, life is still slow and people are welcoming in Thimphu. You will arrive Thimphu through a beautiful 90 minutes scenic journey from the Paro airport. Since reaching there, it doesn’t matter if you go out for the trekking to TIger’s nest, or day trip to Punakha or even exploring further to the Phobjikha valley, you have to spend time to explore Thimphu. Let’s take a look at the best places to visit in Thimphu!

National Memorial Chorten is one of the most popular places to visit in Thimphu. The word Chorten means Seat of Faith. The Bhutanese think that monuments like this resemble the mind of Buddha. This is a stupa residing in the heart of Thimphu.

You enter the Chorten complex through an ornamental gate passing a small garden. Among the four entrances, one is open for entrance. There is no entry fee, so, you can just enter there. There is no roof in the complex.

This is a popular place to pray. People circumambulate the Chorten (named as Kora) throughout the day in a clockwise direction. They also pray on a wooden structure bowing and whirl the red prayer wheel.

National Memorial Chorten is also known as the Thimphu Chorten. With a golden finial and whitewashed body, this Chorten was built in 1974. The third king of Bhutan, Jigme Dorji Wangchuck died in 1972. His mother patronized this Chorten in the memory of his son.

If you look at the top of the Chorten, you will notice a golden spire with the crown. A part of it has an intricate design. It looks like a pyramid. If you go inside, you will find statues, paintings, and mandalas.

While the complex can be busier (comparing to Bhutanese standard, of course!) with visitors, the early morning is quiet. While the parents, pray, the kids play on the grass. You will find birds, especially pigeons in the compound.

Buddha Dordenma – One of the best Places to Visit in Thimphu

My driver brought me here, I didn’t know about it. All I understood that we were going uphill for a while. When I entered the complex, I was spellbound by the humongous size of the statue of Buddha. Unlike the huge complex of Shwedagon Pagoda, this complex only has a statue on the hilltop.

This Shakyamuni Buddha statue was built to celebrate the 60 years of the fourth king of Bhutan – Jigme Singye Wangchuck. This wonderful piece of art was built in China and brought to Bhutan by road in pieces. It was later reassembled here in the Kuenselphodrang Nature Park to the southern part of Thimphu.

You will find the Buddha statue surrounded by several Goddesses with red lips, a golden body, plucked eyebrows, and an ornamented crown. One of their hand is in a pose for blessing while another was carrying different things. They are not huge like the Buddha statue but no less lively and beautiful.

You should visit this place at a different times to get the most out of it. When you will go on a cloudy day, it looks way different compared to a sunny day. During the nighttime, the statue illuminates with light – giving it a wonderful look.

The statue is huge – about 52 meters tall – that’s about 30 times taller than me! When you will go there, you will sense the vastness of it. You can enjoy a beautiful panoramic view of the Thimphu valley from the complex.

To me, Buddha Dordenma is an underrated statue. People don’t know much about it, they should! This is not only one of the best places to visit in Thimphu but one of the most precious things in entire Bhutan!

Bhutan has some majestic Tibetan-style monasteries. Although I loved the Punakha Dzong more, Tashichho Dzong is also majestic and one of the most (as well as must) visited places in Thimphu. If you go there in the harvesting season, you will see the Dzong surrounded by paddy fields. The mountains give it a fascinating background.

The Dzong is a traditional architecture and meant to be a fortress. The Tashichho Dzong is white and red and now hosts the government offices of Bhutan as well as acting as a monastery. There are two separate entrances leading to the monastery and the office. If a Bhutanese does not wear their traditional dress (s)he cannot enter into a Dzong.

Tashichho Dzong can be considered one of the finest examples of Bhutanese architecture. Unlike skyscrapers in conventional cities, they look grand and majestic. It’s in-fact 900 years old Dzong but enlarged later. Sadly, a fire outbreak destroyed a large part of the Dzong and remodeled it later.

Changangkha Lhakhang is a temple in Thimphu. The amazingly beautiful setting of this temple makes it one of the most attractive places to visit in Thimphu. This ancient temple perched like a fortress just beside a river in Thimphu. The Bhutanese believe it to be a wish-fulfilling temple. You need to climb stairs to reach on top of it. Don’t forget to whirl the numerous small prayer wheels once you are there. Like many other architectures of Bhutan, it has a dominance of white and red while the golden took a major part of its design. Changangkha Lhakhang is a calm and peaceful place as many people do not visit here.

Takin – a goat-like animal along with a heavy far and strong horn is the national animal of Bhutan. This is a rare animal as it is seen in only a few places in the world at higher altitudes. Royal Takin Preserve (also known as the Motithang Takin Preserve) is the place where you can spot those animals.

Initially, this place was a designated zoo of the Takin. However, two things happened which lead to the dismantling of the zoo. Inside a zoo, the Takin was not moving freely, they were losing their characteristics. Besides, the king of Bhutan found it cruel to confine the animal inside the zoo. That’s why the Takins are in open space now.

As the Takins are not confined in a cage, it’s difficult to spot them as the area is quite big – about 8 acres. Your best chance of seeing them is in the morning near the fence when they are being fed. It offers some good hiking trails in the forest amidst greeneries. As the land is not flat, I found it challenging physically to roam around, I am sure you are not unfit like me!

There are 195 capital cities in the world and only 2 of them do not have any electronic traffic light. Thimphu is one of them. So, when in Bhutan, do not forget to go to the traffic control booth and witness something not many people would be able to see in their lifetime.

The traffic is handled manually by the officer. They continuously keep moving their hands in different directions like a professional dancer dancing on the stage. It looks amazing! The traffic in Bhutan is so slim, the electronic traffic light hasn’t been necessary, it’s manageable with only human interaction.

Saying so, once they installed traffic lights as a pilot project. Later the Bhutanese complained that they are too mechanical and they prefer the human touch. So they scrapped the project – I am glad that they did. Each time I visit Bhutan, I go to this place to enjoy the live performance of the traffic police.

Archery is the national sport of Bhutan and a symbol of pride for the Bhutanese. Visit the Changlimithang Stadium and Archery Ground. You will see people practicing archery wearing the Bhutanese traditional dresses. It was a lot of fun seeing it as the players were dancing and mocking each other.

Find a hilltop and enjoy the surroundings

If you are tired of seeing the Dzong, Chorten, and Dordenma of Thimphu, now is the time to stop and admire this beautiful capital. Just, place yourself on a hilltop and sit. Don’t worry, you will find plenty of such places. As time passes by, admire the tranquility, the fresh air, the colorful buildings, flowing rivers, snake-like roads, and the green valleys.

It doesn’t matter whichever direction your visit, you will find something interesting like the Thimphu gate or something refreshing like a river, floating clouds, or eye hurting greeneries.

A Walk in the Street of Thimphu

One of the best ways to explore Thimphu is to take several Kilometers of the walking trail starting from the clocktower square. This route will cover some of the most popular places to visit in Thimphu. Continue your ride towards the traffic circle. An uphill walk will take you to the famous Swiss bakery.

Now, you need to go towards the national memorial Chorten. It’s a long walk. Now, get back towards the location you came from taking a left at the Jangchhub Lam. You will reach Droma Lhakhang. Spend some time there and visit the Thai Pavilion Park nearby. From there, get back to the Norzin Lam (the main road), and visit Sephub Gyeltsen Tsongkhang to buy traditional clothes and prayer flags.

A short walk from there will take you to the National Handicrafts Emporium as well as the National Textile Museum. Your next step will be the Taj Tashi hotel, the most expensive, gorgeous, and out-of-the-world hotel in Bhutan. Don’t forget to take a coffee there as it will give you an opportunity to see the lobby.

From Taj Tashi hotel head towards Chang Lam, cross it, and continue your journey towards Chhogyel Lam. Before visiting the weekend market there, go to the Zangto Pelri Lhakhang. Spend some time besides Wang Chhu river. End your walking tour in the Changlimithang Archery field.

Some other Places to Visit in Thimphu

Apart from the above, there are several other places worth visiting in Thimphu. Some of them were covered in the walk above, however, I am adding them here as I am not writing about them separately.

Loved the Places to Visit in Thimphu? Pin it!